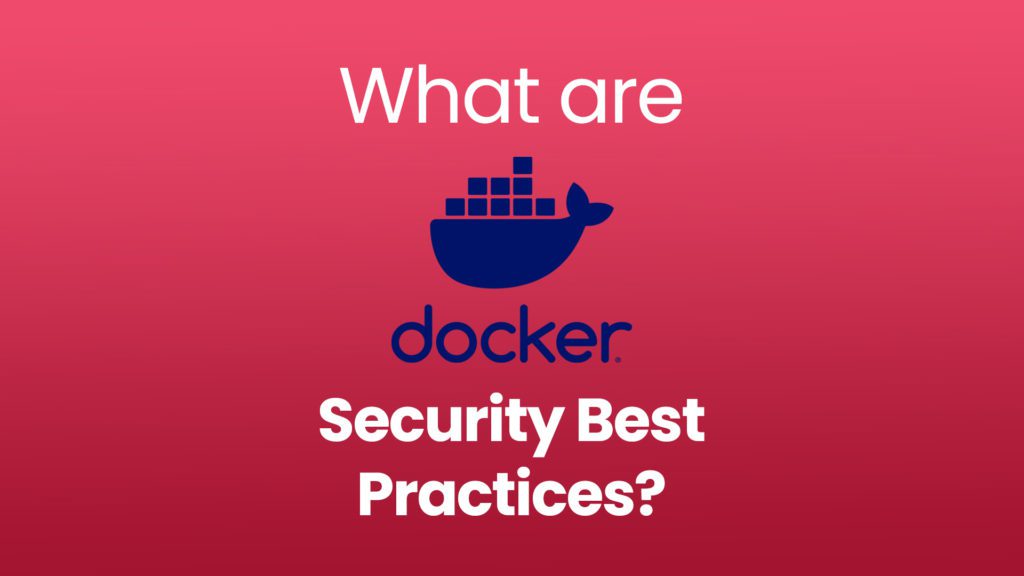 Using containers and open-source applications, web developers can churn out programs faster than ever and bring large-scale projects into rough operation in a fraction of the time. Unfortunately, the use of OSS also brings more security issues into the mix. Development now requires Docker security best practices to build more secure containers and ensure safe operations at launch.

Docker is a containerization platform. While the platform is not essential for creating containers — standardized executable components — it makes the process easier. Containers hold operating system dependencies and libraries with the application source code, enabling an application to run in any environment.

Docker provides a toolkit and a safe space to develop, deploy, and manage containers. With the platform, a developer can access, update, and alter containers through a single API.

What Is a Dockerfile?

At its most basic level, a Dockerfile is a text file containing a series of instructions or commands for the dependencies of a specific container. When developers execute these instructions correctly, they create a copy of a Docker image.

Therefore, a Dockerfile is a blueprint for the build process of the container. In most cases, the process started with a Dockerfile is automatic, allowing each component to develop and operate as designed without interference. However, team members can receive the original file to make adjustments or alter the build order if or when necessary.

Arriving in the market in 2013, Docker container technology revolutionized the web development industry by introducing an open-source containerization platform. While containers help fix logistical programming issues, the open-source nature of the development process brings with it security risks.

While containerization created a way for more complex and intricate web applications to work across various machines without issue, programmers quickly realized the need for security measures. Docker security best practices continue to develop, revolving around several critical areas, from configurations to images and registries to network security.

Before using Docker in development projects, it is critical to focus on the foundational elements of your project: Docker and the host operating system. Minimizing risks and vulnerabilities begins with Docker and host configuration.

Container problems often result from preventable vulnerabilities, especially when a developer forgets to patch both the host operating system and the Docker Engine — this can result in kernel exploits. An attacker can use a non-privileged container to gain root access to the host, causing all sorts of issues. Therefore, regularly update Docker and its host to ensure compatibility and proper function.

Unix network sockets help establish and facilitate communication with the API. The Docker daemon socket is the socket used within the Docker platform. The socket provides permissions for the root user, but if the root user shares it with others, this also carries equivalent permissions for accessing the host. Users can also bind the socket to the network interface, providing remote access to anyone with permission or access to the daemon socket. For developers who want to avoid these common pitfalls, obey two Docker rules:

Run Docker as a Non-Root User

It is best for programmers looking to mitigate daemon and container run-time vulnerabilities to run Docker in rootless mode or as non-root users. Alternative methods can grant access to attackers, making entire nodes and clusters vulnerable to a cyberattack.

Docker runs containers and daemons within a user namespace in rootless mode, but unlike modes like userns-remap, it runs without root privileges by default. Running Docker in rootless mode is straightforward:

Programmers need to remember to set memory and CPU usage limits for containers. Without limitations, cybercriminals can intensify an attack by utilizing the underlying host resources after breaching resource-intensive containers. While some developers might not initially realize it, Docker’s default allows containers to access all host resources, both RAM and CPU. The primary concern of leaving Docker with its default setting is security, but if developers give containers too much power, they can disrupt and interfere with other host services.

Manage the Images in Docker Containers

Docker images make up the core of a developer’s containers and projects, and many come from public repositories, meaning they might contain vulnerabilities. If the developer fails to scan or inspect the images for vulnerabilities, those issues will carry over into the containers you make from the image. While image scanning is one method for protecting projects against known vulnerabilities, intelligent design is just as crucial to security.

Base images provide a convenient foundation for the creation of a unique Docker image. While a base image saves time compared to configuring an image from scratch, it also increases security risks. Most times, base images contain more information than a program might require; for example, a base image might have a complete Debian Stretch distribution when the project doesn’t need operating system utilities or libraries.

Programmers should opt for minimalism over immediate convenience. Every additional component in your image represents another attack surface. Therefore, programmers and developers need to keep images small and precise.

Docker images must remain clean to prevent any security risks. “Clean” refers to the elimination or control of access to sensitive information, including:

Hardcoding sensitive information into a Dockerfile is never a good idea because it is copied to Docker containers. Sometimes, the data is cached into container layers even after being deleted. Products such as Docker Swarm provide secret management options to resolve potential issues, but it is best to avoid the problem from the beginning.

Using container registries is a convenience, but as with any convenience, there are tradeoffs. Registries can present security risks because there is no way to guarantee the source of the image. An image might contain unintentional vulnerabilities, or attackers might have intentionally replaced the original image with a compromised version.

When considering best security practices, it is best to use a private registry behind a firewall. Role Based Access Control is another layer of security for registry protection, restricting the uploading and downloading of images to specific users. While open access can improve workflow, it is an increased threat to project and organizational security.

While vulnerability scanners are excellent tools for searching code and container issues, more robust security is vital to maintaining safe operations. Real-time monitoring is essential for business operations, including when using Docker. The speed at which problems can propagate across applications and containers means organizations must use tools and practices to achieve observability of various components, including:

Use CI/CD for Testing and Deployment

Continuous integration and delivery (CI/CD) enables developers to deliver changes and updates more frequently while maintaining quality and security best practices. Using CI/CD for testing and deployment is ideal because it automates many of the redundant steps of a process, ensuring developers can focus on the core of the work.

Kernel namespaces provide added security when operating a server running multiple services. The namespaces ensure services are isolated from each other, making the server less likely to experience a global attack. While an intruder might access one service, when businesses use a kernel-based model, the likelihood of that same intruder breaching other services or components is diminished substantially.

The primary capability of Linux kernel namespaces is isolation. Implementing Linux kernels allows a developer to run and house a range of applications on a single real machine without worrying about interference or needing virtual machines. The isolation is paramount to the stability and security of the services on a server.

When building containers and images with Docker, it is common for developers to send and receive data from remote Docker registries. Without adequate authentication, these data swaps can lead to serious security concerns. However, Docker Content Trust signatures allow businesses and developers to use digital signatures to provide verification of publishers and the integrity of images. If you want to streamline your docker vulnerability scanning processes, consider SOOS.  Sign up for the flat-rate pricing and preserve your containers.