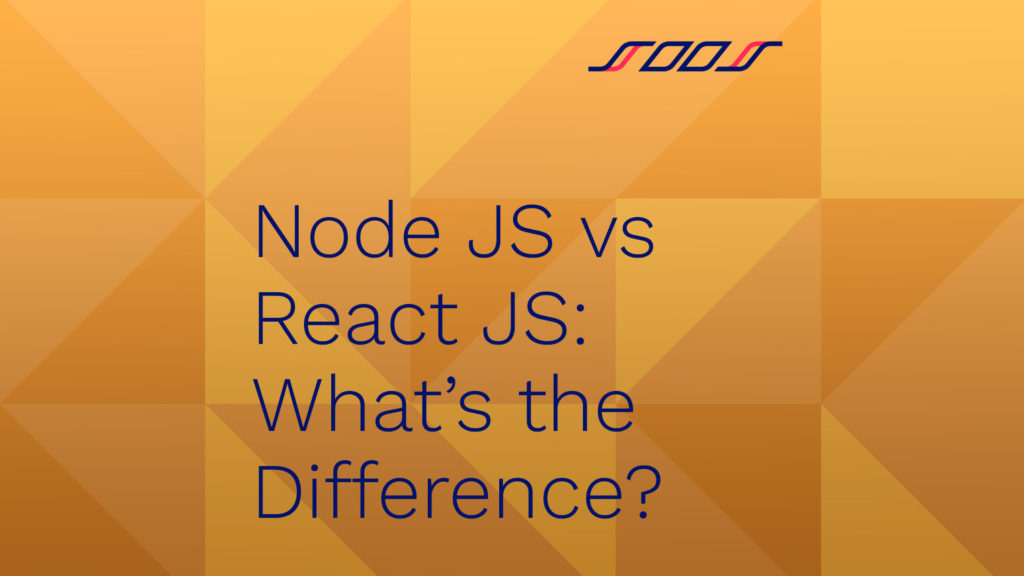 Every internet user on the planet interacts with web applications built with React and Node JS. Both tools have helped foster the content people view on widescreen televisions, computer monitors, and smartphones. Knowing Node and React’s roles in the web application ecosystem gives developers a leg up in the software marketplace. Understanding the security issues around these popular tools can help a coder avoid disaster.

What Does JS Mean?

React JS vs. Node JS: What does the JS stand for? A file ending with the .js subscript contains JavaScript code. Born in the early 1990s, JavaScript is an interpreted programing language that offers an excellent blend of programming power and ease of use. The language ushered in the era of dynamic web pages and is now a standard building block for every website.

In its early years, JavaScript only handled client duties, the action that takes place in a web browser. The other half of a web application requires communication with a server. For the first two decades of the internet era, deploying a web app required JavaScript for client operations and another language to fetch data to and from the server. Many developers wished that the friendly and powerful JavaScript could also handle backend server duties. In 2009, this hope received an answer: Node.js.

With Node.js, JavaScript took on server functions, making it possible to use a single programming language for web application deployment. Node runs happily in popular operating systems such as Linux, Windows, macOS, and BSD Unix. Node runs code asynchronously; that means that after passing a client’s request to the file system, the runtime environment can move to the next request without waiting for the file system to complete the previous query. Node passes the data back to the client when the host file system returns an answer. This feature simplifies coding and enables responsive performance for end-users.

Node proved explosively popular with developers, and coders leveraged the responsiveness with ever richer web content. Node.js receives aggressive development with nightly interim builds and twice-yearly major updates. Along the way, Node increasingly made it possible for developers to move some tasks out of the browser and onto the server. Not surprisingly, much of Node’s development focuses on speed. Node’s original responsiveness encouraged developers to pile on ever higher amounts of content, necessitating additional rounds of speed improvements.

Node’s release triggered other software advances. Within a year of Node’s introduction, package manager npm was born. Written in JavaScript, npm brought order to the chaotic hierarchy of packages that were the building blocks of web applications. Microsoft later acquired npm’s corporate parent, and the venerable package manager continues as an integral component of every Node installation.

In 2011, social media giant Facebook confronted user dissatisfaction with the platform’s inconsistent and often slow performance. In reaction, the company developed a software solution, creatively named React. Two years later, Facebook released React to the free and open-source community. React is a JavaScript library — a collection of code — for creating single-page user interfaces. UIs are the part of an application that users see and touch. React quickly won wide acclaim from developers for its ability to get an application up and running in a short time. Stepping through React’s tutorial demonstrates the framework’s capability.

Two years after React’s open-source release, Facebook debuted React Native, a framework for building applications on Android and Apple’s iOS. Over the ensuing years, React has gained a thriving ecosystem of plug-ins and libraries.

Node and React are not competitors, and the tools fulfill different missions. Node is a runtime environment: It runs JavaScript code. Conversely, React is a framework: Developers build JavaScript applications on its structure. Many successful web applications employ both tools. Notably, Netflix employs React to build the service’s previewing interface while relying on Node.js for server duties. Whether a developer works for an internet giant like Netflix or a startup, they must achieve one mission to maintain customer loyalty: security.

What Are the Critical Security Steps for React Apps?

While powerful, React is not like a self-driving electric vehicle. Instead, think of the framework as a 1960s muscle car with a four-speed manual transmission and a heavy clutch. Deploying a secure web app with React requires adherence to secure programming practices, a difficult challenge under ship-it-yesterday marketing pressure. As a starting point, freeCodeCamp’s Shachee Swadia outlines some of the best coding practices for React apps.

Applications built with React share the vulnerabilities of all JavaScript apps. The JavaScript threat model leads off with these attack vectors:

HTML is the foundation of every web page; that makes this code the starting place for security. Swadia recommends three techniques to deter intrusions:

Beyond requiring multi-factor authentication for all users, Swadia advises securing the client-server connection by adding a realm attribute to the app’s domain header. This method is a quick and easy way to limit validated users to the members of a comma-separated list.

The Zip Slip vulnerability permits remote command execution; thus, avoiding this vulnerability is a mission-critical task for developers. Zip files contain compressed data, and that data may well contain malicious code when extracted. Scanning your project with a software composition analysis tool will flag any known libraries containing the exploit, and renaming zip files before extraction is another way to thwart the exploit. Finally, confining all of a React component’s files to a single folder can mitigate the effects of remote command malware.

By necessity, many applications must link to other URLs. With these apps, avoiding links to URLs laced with malicious JavaScript code is imperative. Since a valid URL must begin with “HTTPS:”, Swadia recommends passing every URL through a shortcode block to check for the correct preface. More comprehensive protection comes from allowlists and blocklists. A blocklist prevents links to any listed URL. Where feasible, allowlists shrink the attack space even further by limiting links to approved sites.

React must allow connections with other application programming interfaces to create a web application as a user interface framework. Step one is to implement encryption for these connections.

A more comprehensive measure is API schema validation. An API’s schema defines the data structure; this allows coders to reliably exchange data in the correct format between software building blocks. The usual format for this exchange is JavaScript Object Notation, usually shorted to JSON and pronounced like the leader of the legendary Argonauts. JSON’s flexibility makes it simple to pass data and maintain backward compatibility among APIs. Unfortunately, unvalidated JSON strings leave a React application wide open to XSS and SQL injection attacks.

Full-stack JavaScript pros may write custom validation code, but more than a dozen React validation libraries have earned high reviews in the JS community. With the heavy lifting offloaded to a library, a schema validation block takes between eight and 15 lines of code. The coding is a small price to pay when considering the reputation damage from a security breach.

Layered security is the best security. Developers can backstop their diligent code-writing efforts by adding a web application firewall. A firewall acts as a filter for unauthorized transactions. This tool can prevent malicious code from coming in and sensitive data from leaking out. WAFs come in three flavors:

Security is never an option, whether using Node JS, React, or any other web application deployment. The best security comes when extra security measures are layered into your build. Having a software composition analysis tool that integrates with your existing frameworks and CI/CD pipeline is essential. That tool is SOOS. Able to track nearly 190,000 vulnerabilities, SOOS helps your team focus by highlighting issues in three tiers of severity.

Malicious code isn’t the only hazard for software developers. SOOS also provides you with an up-to-the-minute picture of your current license exposure, including dependencies and a complete history of every scan. SOOS offers every tool you need in SCA without bloatware. All of this capability comes with the industry’s simplest pricing model. Start enhancing security and saving time today.