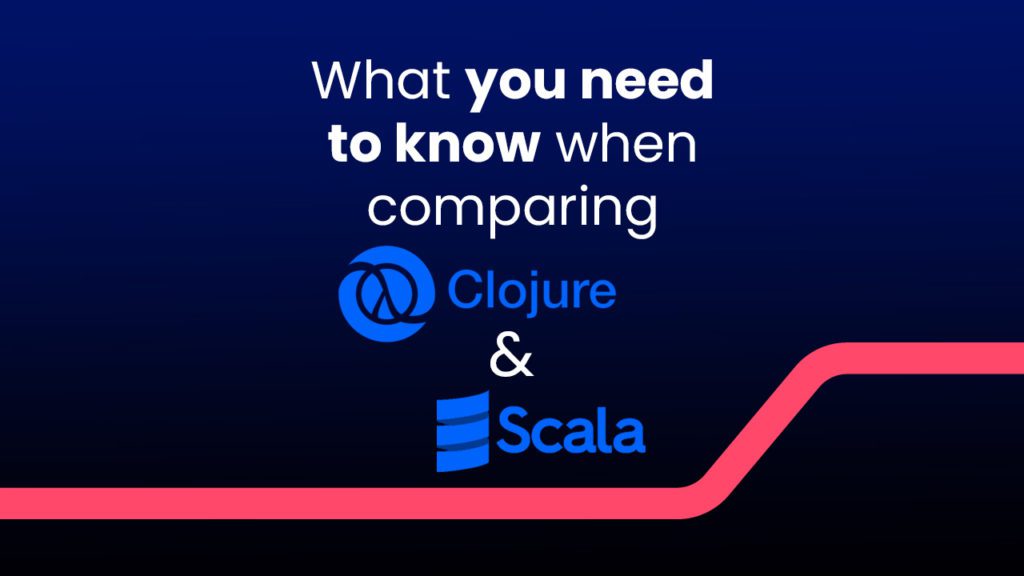 Both programming languages are referred to as JVM languages because they can each run on the Java Virtual Machine. However, most programmers prefer these languages to Java because they focus on immutable data structures, reduce errors, allow for precise and concise code, and eliminate many bugs associated with Java.

Both languages are beneficial, but which is best for your application in the Clojure vs Scala battle? While there is no right or wrong answer, understanding the specifics of each language, looking at a direct comparison of speed, programming, and complexity, and reviewing the key differences can help you make an informed decision.

On the surface, Clojure is a programming language. However, beyond the general-purpose nature of its design, it is dynamic, combining a robust infrastructure with the interactive development and approachability of a scripting language, forming something new for multithreaded programming. While considered a compiled language, Clojure is fully functional at runtime. With accessibility to Java frameworks, type interference, and type hints, the language avoids reflection during calls to Java.

When inspecting Clojure’s design, the Lisp dialect is evident through the dependence on a substantial macro system and the code-as-data philosophy. In the immutable state, the functional language offers persistent data structures. Still, Clojure provides a reactive agent and transactional memory system in a mutable state, ensuring correct, clean, multithreaded designs.

Scala is a flexible language used for general-purpose programming. While it is statically typed, the language is both functional and object-oriented. On the surface, the language is like Java, allowing for Java library integration, but it is more complex and scalable. The purpose of Scala’s design is to permit running in JVM, but with less coding and work, allowing for quicker application development.

Scala is a simpler language when compared to Java, requiring less rewriting and providing bug-free assurances. The language is less restrictive with greater workability, meaning programmers can craft their code with fewer complications and better results. Still, Scala is different from Java and other standard programming languages, meaning it will take time to learn, but for most businesses and developers, the investment is worth it.

In many ways, Clojure and Scala are similar. Both languages aim to improve the inefficiencies of other programming languages, like Java, to improve the flexibility and conciseness of code. However, despite the similar goal and some features, each language is independent. There is a learning curve to adopting either. The language you choose will typically depend on three factors: performance, functional programming, and complexity.

When reviewing the speed of each language, it can be challenging to determine a winner. While each language is fast, measuring the speed of Clojure is tricky because of the number of components in the program. That said, Clojure has a reputation for being robust, fast, and practical, and its practicality is often the reason people favor the language over others. Still, from a strict performance standpoint, Clojure takes a while to boot and is slow with collection manipulation.

Alternatively, Scala is much faster than Java. The reason for the speed is the language’s support of the tail call recursion technique. TCR is a recursive function that allows the recursive call to be the last execution of the operation. The reason the TCR affects the speed is tail recursions are typically optimized by compilers. Therefore, Scala is a naturally optimized language.

As both Clojure and Scala are functional programming languages, they each use immutable data, ensuring program functionality. Whereas Scala possesses an immutable collection of libraries permitting first-class structures, Clojure uses an immutable set of data structures. Immutable data is preferential for programming because it results in non changeable objects, lowering the risk of mistakes in the distributed system. That said, while immutable data is the default in each language, both permit mutability functions.

When it comes to functional programming, distinguishing a winner between Clojure and Scala is challenging. Each language allows for flexibility and full functionality at runtime, meaning either would prove beneficial for development.

Clojure is dynamically typed, and when reading the code, it can feel a bit like reading from the inside out. The language promotes the use of built-in data structures: maps, lists, and vectors. It is a complex programming language to learn, and there are few, if any, similarities with Java, meaning programmers will need to invest a great deal of time learning Clojure.

Scala, alternatively, is known as a “better Java.” Its author designed the language to overcome the tedious, redundant, and restrictive nature of Java. Programmers used to Java might take to Scala easily as it shares many characteristics, but the code differences and distinctions can be challenging for newer programmers. However, despite the potential challenges, Scala creates clean and organized code, allowing for simpler navigation in concurrent and distributed programming.

Selecting a language based on the ease of adoption depends on programmer experience. If the programmer is used to Java, they would likely have an easier time learning and understanding Scala. Clojure is a complex and challenging language, especially coming from a Java background.

Both Clojure and Scala are functional languages that can run on the JVM. Each provides robust and competent features that help combat some of the challenges Java faces. While either language is beneficial and worthwhile to learn, the transition from Java to Scala is straightforward. Clojure is a dialect of Lisp, meaning its components can be alien to some. Regardless of the programming language you use, the security of your projects is critical. SOOS’ software alayzing tool can scan code and applications written in various languages, alerting you to vulnerabilities and helping mitigate any future exploits. For a low monthly fee you can protect all your current and future projects. Sign up and take advantage of SOOS’s robust platform.

Choosing the Right SCA Tool for Your Company
Which One Is Better: Scala vs Kotlin